Naruto Uzumaki is a shinobi of Konohagakure's Uzumaki clan. He became the jinchūriki of the Nine-Tails on the day of his birth — a fate that caused him to be shunned by most of Konoha throughout his childhood. After joining Team Kakashi, Naruto worked hard to gain the village's acknowledgement all the while chasing his dream to become Hokage. In the following years, through many hardships and ordeals, he became a capable ninja, regarded as a hero both by the villagers, and soon after, the rest of the world.

Shuriken are sharpened, four-pronged metal stars, useful for throwing. They can also be used for close combat, but not very efficiently. Although small, they can be used to distract, pin down enemy shinobi, or, if accurate enough, kill or incapacitate an enemy.

Like shuriken, are one of the most common tools used by shinobi. It is a black dagger — about the length of one's hand — with a handle wrapped in bandages and a ring-like pommel. While usually kept in a shinobi's weapon pouch, they can also be kept on spring-loaded wires up the user's sleeve.

The orbs of malleable black chakra, which can alter their form and characteristics in various ways. Though only the size of a fist, each hides within it the power to obliterate an entire forest.

Truth-Seeking Balls encompass the power of all five basic natures, and as such they surpass both kekkei genkai and kekkei tōta. By combining the various natures inside the orbs, it is possible to produce a variety of effects. They are capable of instantly turning anything they touch to dust in a manner similar to Dust Release, though this does not always occur. If imbued with with a certain Yin–Yang Release jutsu, the orbs can nullify any ninjutsu they touch and thus become impervious to it; this includes negating the regenerative qualities of Impure World Reincarnation, making it possible to permanently damage and kill those reincarnated by the technique. However, the orbs are incapable of nullifying senjutsu, as according to Naruto, natural energy can be used to combat itself. 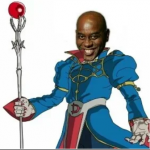